This tag is associated with 3 posts

I have recently published an article in the PAVILION journal for politics and culture #17. Apprehension. Understanding through fear of understanding. This issue is also the reader for the Bucharest Biennale 6.

END_OF_DOCUMENT_TOKEN_TO_BE_REPLACED

Lecture at Pavilion Center 9 May 2013

On the 9th of May 2013 I will hold a public talk at Pavilion Center on the following subject: Online activism as the precursor of the “Foam City”.

END_OF_DOCUMENT_TOKEN_TO_BE_REPLACED

The invisible mobilization : from online activism towards public space 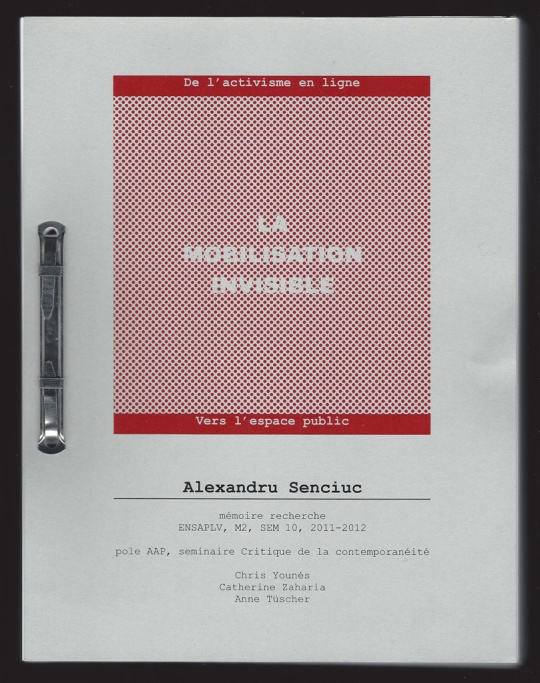 The existing mechanisms of collective deliberation in urban, national, international, global space are in an embryonic state. Inefficient, inaccessible, inexistent, these devices obstruct the functioning of the political systems of democracy. In 2011, the revolution in the Arab world, the 15M movement and the Occupy Wall Street movement, the sphere of online activism (re)entered into the sphere of global public space. The efficiency of its devices shown in the mobilization, organization and collective construction opened a new possible universe, of the invisible mobilization.

Taking this phenomenon as an example, the dissertation studies how its function, its uses, its features and its technologies could be transferred to the public sphere. By deconstructing and reconstructing the relationship between technology and its use, the pattern of the invisible mobilization is completed in its physical and virtual dimensions.

Overall, the invisible mobilization and the architecture project New Technologies in Istanbul form a sphere which articulates different forms of public space at different scales: urban, national, international and global. This joint does not create in a concentrical way, but rather in a transversal multidirectional way. The figure of this political act is to fill the pockets left empty by the spherical systems of representative democracy with ephemeral forms of direct democracy.